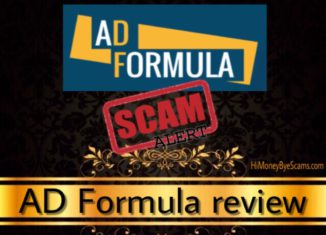 Welcome to my AD Formula review!

Wondering if you can earn $3,000 a day thanks to this system or is AD Formula a scam that will leave you with less money at the end of the day?

First of all, I need to congratulate you for taking the time to do your own research before taking out your credit card.

As you may already know, there are too many ugly scams out there so doing your due diligence is the way to avoid scams and find the real way to make a living online!

If you are looking for a short answer, AD Formula is a scam that will not make you a dime!

Wondering how I know it’s not legit? I’m going to show you some proofs in this honest review.

If you’re sick of scams, check out my 1st resource to make money online HERE!

What is AD Formula about?

Today I received an email concerning the AD Formula so I thought I would check it out to see if this one would be legit or just another dangerous scam.

The moment I landed on their sales page, it didn’t give me confidence because it looked very similar to other scam pages I have come across in the past.

But they say that we can’t judge a book by its cover, so I didn’t want to come to a final conclusion without doing my homework.

I watched the sales video and I have to say that is no different than the hundreds of scam videos I have watched.

The spokesman claims that you have been selected to watch that exclusive video, which is not true because that video is not private and is available in many countries.

Also, don’t be fooled by the claim that the video will only be shown to 50 people because it’s available to everyone online.

Truth be told, these scammers want as many people as possible to watch that video. They want you to believe that this is a limited opportunity to make it seem more valuable.

Honestly, I couldn’t help but laugh when I heard that that video is not like the others and that they are not trying to sell you anything.

As I will show you later, this system is not free and they want to take as much money as possible from you.

I’ve lost the count of the times this guy says that this is not a scam or BS system, but the truth is that it’s no better than the other scams I have exposed.

Scammers usually try to get you to believe that they are on your side to gain your trust and part with your hard-earned money.

In the next section I’m going to reveal how they try to make money at your expense.

AD Formula is said to offer an easy and fast way to make $3,000 a day with banner ads.

They claim you just need to invest in banner ads from different categories. These banner ads will be displayed in websites and you get to profit when people click and make a purchase from them.

It sounds awesome, but the truth is that it does not work that way.

It’s not a real system

If you complete the form next to their sales video, you will get taken to the BannerBit platform.

That’s when you realize that AD Formula is not the real system they are selling you.

The fact that they don’t mention anything about BannerBit is a big red flag because it shows you that they are not transparent about what you are getting into.

I have exposed lots of scams and have seen this time and time again. Con artists usually promote their frauds under fake names because they don’t want you to find truthful reviews like mine.

In other words, they are not promoting this scam as the BannerBit platform to avoid people like you find the truth.

Once you are inside, they will ask you to fund your account with at least $200 and then you can go to their marketplace to find banner ads.

If you invest in those ads, you might get excited when you see some earnings in your account balance.

These scammers will try to get you to believe that you are making money to incite you to invest more.

And then, when you want to cash out you will realize that this is nothing but a scam. They will not allow you to make any withdrawal.

Well, they will tell you that they need your personal and financial information like your ID, an utility bill or your credit card details.

If you give them this information, that’s it. They will have achieved their selish goal and you will be left with nothing because they will not send you any money and will not give you any money back.

Once you have funded your BannerBit account, you can say bye to your hard-earned money. That’s how AD Formula a.k.a. BannerBit really works.

Jack Heaton is a fake character

They claim that the owner of AD Formula is a man called Jack Heaton and we can also see a picture of him below the sales video.

The problem is that the guy who appears in that picture is not Jack Heaton.

I did an image search and discovered that Jack is a fake character designed to make it seem like the owner is showing up.

This guy’s picture can be found on a stock photography website called Thinkstock. Below you can see the proof:

So there you have it. This guy has nothing to do with AD Formula and he might not even know that scammers are using his picture to market this scam.

The fact that the real owners don’t show their identity is an indication that they don’t want us to know who we are dealing with.

These scammers don’t show up because they don’t want to get persecuted or reported. That’s why I cannot trust the people behind AD Formula.

The video testimonials are paid actors

The spokesman claims there are people who are earning thousands of dollars thanks to this system.

In the sales video, we can also see some people who claim to have had financial success with AD Formula.

But the ugly truth is that these people are not real members. They haven’t invested in banner ads and have not made the kind of money they talk about.

I expose scams all the time so I’m very familiar with their faces. These people are Fiverr actors that have appeared in other scams like Kindle Sniper, Digital Payday, The Ecom Formula and Insiders Cash Club.

Below you can see some undeniable proofs:

There are no positive AD Formula reviews because this fake page has recently come out.

I mean, if this system really worked, there would be some positive reviews.

When it comes to BannerBit, I remember exposing it last year and I have been receiving comments from people who have lost thousands of dollars to it.

It’s marketed as a get-rich-quick scheme

One of the biggest red flags is the income claims they make.

They are marketing this system as a way of earning a lot of money fast or without doing much work, which is something that doesn’t really exist.

No matter the method you use to make money, it will not happen fast or without you putting in the effort.

This is just like anything worth achieving in life, you will have to work your butt off to accomplish great results.

So I recommend you to stay away from people who claim to have a system that allows you to earn a lot with minimal effort.

Is AD Formula a scam?

AD Formula is a total scam because it only benefits the unethical people who have created it.

Like I said, it doesn’t work like they tell you so I recommend that you stay far away from it.

If AD Formula was a product or something that provided you with some training, then I wouldn’t have called it a scam.

There are products that are low-quality and also make fake claims but I don’t call them a scam because it’s possible to get a refund from them.

But in this case, AD Formula is a 100% scam because it’s not a product or a system. It’s a fake page that funnels to BannerBit, which is a fraudulent platform.

Also, the reason these scam artists ask for your personal data like your email address and your phone number is that they want to contact you.

If you gave them your information, you can expect them to send you spam emails and also call you to convince you to invest as much money as possible in their scams.

Not only that, they might also ask you for more information so that they can profit from it. They will try to steal your identity and will also sell it to other companies or unethical individuals.

Other fake pages that you need to avoid are the following:

After everything I have mentioned in this review, I conclude that I do not recommend AD Formula.

Let’s say bye to the scams!

So how can you stop wasting time on scams like AD Formula? You need to keep in mind that it takes commitment, effort and time to reach the point where you are earning a full-time income online.

When I realized that, I stopped looking for the latest products or systems that make high-income claims.

I’m grateful that I learned about a business model that was right for me because it was newbie-friendly and also gave me the chance to make passive income.

I have to confess that it took me some months to earn my first cent but it was worth it. Now I’m earning a consistent income month after month and I have to give thanks to the platform where I learned it all.

There’s so much to say when it comes to this business so I’m not going to explain it all here because this post would be too long lol.

I created a FREE step-by-step earn money online where I explain how it all works:

You will learn how this business works, the method I used, income proofs, the place where I learned it all…

My free guide shows you what you need to know to get your online business started the proper way.

Not only that, you will also see how you can start today for free!

That’s right, I’m not kidding, you will be able to try things out without spending a dime. Isn’t it cool?

In addition, you also get the chance to receive free help and support from me and thousands of people who are on the same path as you.

Building your own online business that makes you money for many years to come is not easy but you get really satisfied when you reap the rewards.

I’m so excited for you to say bye to the dangerous scam systems and start building your future today!

I hope this AD Formula review has been useful to you and you will make the best possible decision.

Feel free to share it with whoever you believe that will benefit from it!

If there’s something else you want to know or you have any questions, don’t hesitate to leave a comment below and I’ll get back to you ASAP! ?