You are here
Home > Avoid scams > Is Blazing Trader a scam? Find out the truth! 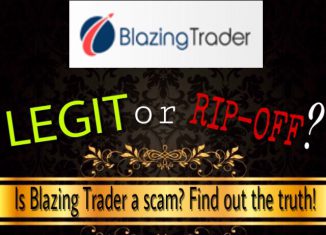 Today I’m going to talk about a site I’ve recently come across, Blazing Trader. If you’ve heard of this site before and have been thinking whether to join or not, then read my review to know the truth.

As you already know, I like to review all kind of online products to help you make the right choice and prevent you from falling for scams.

Let’s see what Blazing Trader is about!

What is Blazing Trader about?

Blazing Trader is said to be a binary options software created by Johan Strand, who is a self-made millionaire and promises that you’ll at least earn $20,000 every day for the rest of your life without putting in the effort.

He presents himself as an ex-professor at the department of applied mathematics at the National Institute of Technology in Zurich. He says that last year he was working with ways to make computer searches work a whole lot faster when handling large amounts of data.

Then he claims that his brother Lars was working with binary options and made a ton of money from it. This is because he created a system that lets him spot emerging patterns in stock movement, which had a 75% win rate.

Later Johan improved the winning rate by spotting a couple of redundancies that were dragging down the system and updating the algorithm, so now the system is supposed to have a 93% winning rate.

Now they’re allowing 100 people to use the system and profit wildly from it. It doesn’t matter if you have 0 experience because their system is automatic so you only need to know to push a couple of buttons.

Doesn’t it sound too good to be true? Yes, he makes over-exaggerated claims to believe it. Don’t be fooled by this kind of claims that sound life-changing, because nothing worth having comes easily.

Is Blazing Trader a scam?

The outright answer is yes, Blazing Trader app is a terrible scam. After watching the promotional video and doing a research, I came to the conclusion that everything about it it’s designed to steal your money.

If they really were millionaires, why would they tell people that they’ll give them something that can earn them millions? It just doesn’t make sense.

Let’s see the undeniable proofs that show how Blazing Trader is not to be trusted.

I searched for the background of Johan Strand but didn’t find anything about him having been a professor of the National Institute of Technology of Zurich.

I’m 100% sure he’s an actor the scammers have hired, since I’ve seen he’s appeared on a YouTube video of someone who was promoting a scam called Lie Detector Millionaire (already out of business).

If you’ve watched the Blazing Trader sales video, you’ve listened to three people claim how Blazing Trader has changed their lives and all that amazing stuff. The truth is that all of this is fabricated to make you believe that Blazing Trader really works.

These people who claim appear in the video are Fiverr actors that the Blazing Trader fraudsterds have paid in exchange of positive opinions and comments.

Kevin from Chicago is really a Fiverr actor name Kraig Williams, as you can check out here.

Another thing these crooks have done is stealing or buying pictures/videos from other websites like Shutterstock, invent fictional characters and write fake reviews.

Everything they tell you are lies to achieve their goal: make money at your expense. They tell you that you can only win trades, which sounds so unrealistic if we take into account that trading binary options is very risky and there’s no way to predict future results.

Even experienced traders lose money so if you can’t afford to lose your hard-earned money, avoid trading in binary options.

Apart from this, they also say that you can only access the Blazing Trader site with a special invitation link, which is clearly not true. Nobody sent me a link to that page, I found it by doing a Google search, so anyone can check it out.

Note that there are at least 10 domains (I posted them at the beginning of the review) that take you to the same page and all of them are public.

He also claims that don’t try to watch the video later to prevent you from leaving the page. These swindlers just want you to hurry up to join their crap.

They also prey on your dreams of not having to worry about paying the bills or being in debt and being able to do whatever you want. They do this to get you excited so you start daydreaming instead of questioning their real intentions so you end up falling for the scam. Oh, and he mentions “tomorrow” so you think you can make that vast amount of money overnight.

These scam artists take advantage of newbies or inexperienced people or people who believe that making money online is magic and that it can happen overnight. However, this is sooo far from the truth.

Can Blazing Trader make you money?

The answer is no, Blazing Trader won’t make you any coin. It’s a scam software designed to generate profits to everyone involved in it but you.

They claim it’s 100% free, but that’s just another lie. The truth is that it costs at least $250 to start trading, but they hide this fact until you give them your name and email.

If you fill out the form you find in the sales page, then they’ll tell you that you need to fund your trading account with $250 to set it up and start trading.

If you don’t fund your account, they’ll send you spam emails or will call you (they also ask for your phone number) to convince you to make the $250 investment.

If you do fund your account, then that money will be charged to your credit card and you won’t be able to get it back. Their recommended broker will pay the scammers vast commissions and you’ll be the only one who loses.

These con artists won’t accept any kind of withdrawal and once you’ve made the investment they’ll run and hide or will even try to steal more from you.

I’ve reviewed other scam softwares that are similar to Blazing Trader like the following:

A chance to earn money online

I know the idea of making big profits in such a short amount of time is attractive, but it’s not real. If you’ve been a victim to online scams before, I know it’s hard to keep the hope and faith you had before being scammed.

However, let me tell you that it is possible to earn a living online. It’s not easy or fast like the scammers claim, but it’s definitely realistic by putting in the effort and persistence.

If you want to make that kind of money that will allow you to quit your job, then building a long-term business is the best way to achieve it.

In case you’re just starting out or don’t know how to get started, then I highly suggest that you check out Wealthy Affiliate, an online business platform where you’ll learn how things are really done in the online world. You’ll learn about SEO, PPC, video marketing, social media marketing, ways to monetize a blog…

You won’t only get the proper training to create your business, you’ll also meet like-minded people who will support and help you along the way.

If you would like to know more about Wealthy Affiliate, then click the button below to read my detailed review:

When you join, I and other members will welcome you and help you get started. Looking forward to seeing you inside! 🙂

I hope this review has been useful to you and you never fall for online frauds like Blazing Trader. Feel free to share this review on social media so other people can know about this scam.

In case you have any questions or want to share your opinions about Blazing Trader or Wealthy Affiliate, then don’t hesitate to leave a comment below and I’ll reply as soon as possible. Whatever you do next, I wish you the best!