You are here
Home > Avoid scams > Penny Millionaire is a scam! See the proofs 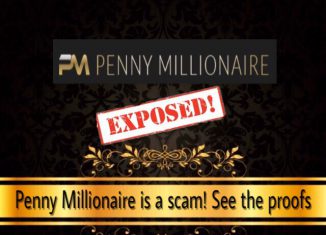 Some days ago I found out another scam software called Penny Millionaire. When I came across the sales page, I initially thought it was a scam.

However, I wanted to find proofs to confirm my suspicions so I took a closer look and did some research to come to a final conclusion.

I decided to write a review to let you all know the truth about Penny Millionaire and help you make an informed decision.

What is Penny Millionaire about?

Penny Millionaire is supposed to be a popular online lottery that takes 100 people and transforms their lives by giving them a system that will make them millionaires in one month.

This man who’s doing the video presentation claims to be David Forrster. He starts by saying “have you ever heard the expression that a penny saved is a penny earned?” and then he claims this magical system can take you from a single penny to over a million dollars in 30 days.

His system is based on binary options trading and the compounding effect. This software sets aside one penny from each of your successful trades and puts them in a separate “compound interest” account, where they’ll double each time a penny is added. So the first cent will become two cents, them four cents and so on until reaching the million dollar mark.

And the best part is, this system is free and, it works on autopilot you don’t need any experience with finance or economics. So Mr Forrster is giving people the chance to become millionaires for free?

To be honest, I couldn’t help but laugh while I was watching the video, it’s completely nonsense.

We know that trading requires a minimal capital amount to get started so Penny Millionaire can’t be free. Another thing is, no one will make you rich for doing nothing.

Moreover, you’ll also see some testimonials if you watch the Penny Millionaire sales video. I’m sure they all are paid actors and that there’s no real testimonial. The only reason why they claim Penny Millionaire has changed their lives for the better is to get paid. They don’t care about lying just to make a quick buck.

Apart from the Penny Millionaire sales video, there are more red flags that you need to be aware of and this is what I’m going to explain in the next section.

Is Penny Millionaire a scam?

Let’s see some of them.

David Forrster is not the Penny Millionaire’s owner

I found out that this man who claims to be David Forrster is nothing more than a paid actor.

His real name is Dan Kyle and he’s been paid to recite a script that the real creators of Penny Millionaire have invented. I found out his IMDb profile.

People behind Penny Millionaire don’t reveal their real identity not to get caught. This is something most scam artists do.

Below the Penny Millionaire sales video you can see some reviews and awards, but it’s all fabricated.

All those awards are fake and there’s no real entity behind them. They’re made up to make you believe that Penny Millionaire is well-known. The reviews are also invented and serve to gain credibility.

There’s no one who has become rich with this software, I’m sure that everybody who has joined has lost their money.

Apart from the video testimonials who are paid actors, in the Penny Millionaire sales page we can see 3 comments and pictures from people who are supposed to be members of this scam software.

However, they’re also fake and people who appear in those pictures have nothing to do with Penny Millionaire. I don’t even think they know that pictures of them have been used to create fictitious characters. Nobody would like to see their face in a scam page.

Take a look at one of them:

Do people behind Penny Millionaire think we’re blind that we didn’t notice that this person from the first picture is a man not a woman?

Rebecca is a feminine name and the person in that picture is a man. I found out that his real name is Brad Frost and he has a blog.

And let’s see another one:

Here happens the same as before. The person in the third picture is a woman so her name can’t be Braden.

I found out her real name is Adelle Charles and you can check out her Twitter profile here.

As I said before, Penny Millionaire hasn’t made anyone rich. It’s designed to generate profits only for the people who’ve created it.

How does Penny Millionaire steal your money?

There are lots of scam softwares out there, more than I expected.

People behind Penny Millionaire are affiliated with unlicensed brokers who part with trader’s money. Therefore, the broker will pay the scam artists commissions for each trader who makes the initial $250 deposit (the broker’s minimum requirement to start trading).

If you fund a trading account with $250, the unregulated broker will manage it in a way that you’ll lose the trades and all the money you’ve deposited.

Before asking you for the $250 deposit, they tell you to complete a form with your name, phone number, email address and a password to get your trading account.

In addition, they’ll call you to convince you to invest as much money as you can. They have no limits when it comes to what they can get away with. They don’t care about ruining other people’s lives.

Penny Millionaire is a binary options scam that you should avoid at all costs because it’s not going to make you money, it’s going to leave you upset, frustrated and in a worse situation.

I believe I’ve provided enough proofs to expose Penny Millionaire as the fraud it is.

I’ve seen lots of review sites promoting this evil scam and claiming it to be a trusted and reliable software. The truth is that they’re affiliated with Penny Millionaire and they’ll get paid for each person who joins through their affiliate link and falls for that scam. They just want to make money and don’t care about lying to their readers.

Another thing is, who’s going to believe that there’s a software that can make them a fortune quick? These get-rich-quick schemes only work for the people who’ve created them.

There’s no secret formula, no code, no system/software that will earn you a lot of money fast and without putting in the effort.

If you’re looking to earn a living online, you should stay away from anything and anyone that promises you easy riches.

If you’re willing to do what it takes to generate an income online the legit and ethical way, then there’s a digital marketing platform that you’ll love.

This platform offers step-by-step training, courses, tools and resources that will teach you to start an online business and take it to the next level.

This business you’ll build will be based on your passions, which will make the process more enjoyable for you! 🙂

Apart from that, inside this platform you’ll meet like-minded folks who are in the same path as you. The community members usually write about their success and experiences and help each other with the questions and issues they have during their journey. I’ve been a member for over a year already and there’s always been someone who has given me a hand when I needed it. 🙂

In addition, this platform is free to join which I think it’s great because it gives newcomers the chance to see how it is without spending a coin.

If you’re interested in learning more about my #1 recommendation, you can now click the button below to read the review I wrote about it:

So this review has come to an end! Don’t hesitate to share it on social media so more people know about the Penny Millionaire scam and avoid it.

If you have any questions or want to share your opinion regarding Penny Millionaire or other online money-making products/programs, feel free to leave a comment below and I’ll reply as soon as possible. I always love hearing from you! 🙂