You are here
Home > Successful mindset > Afraid of failure? Tips to overcome it 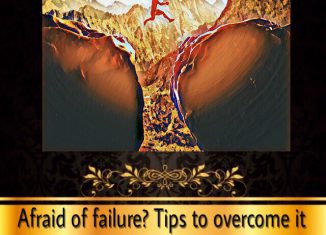 The fear of failing (also called atychiphobia) can be paralyzing, since it causes you to do nothing, preventing you from achieving success and enjoying the good things life has to offer.

Doesn’t it suck? I bet it does. Imagine everything you would do and accomplish if you were not afraid of what it could happen.

The good news are that you will learn what failure really means, how to know that you fear it and ways to overcome it, so keep reading 🙂

What does it come to your mind when you hear the word failure? Perhaps that you’re not good enough?

A simple definition of failure is “a failing or proving unsuccessful; lack of success“. While failure is associated with negative thoughts and emotions, we can also learn from it.

Let’s take a look at some famous quotes from successful people:

“Think like a queen. A queen is not afraid to fail. Failure is another stepping stone to greatness.” – Oprah Winfrey

“I’ve missed more than 9,000 shots in my career. I’ve lost almost 300 games. 26 times I’ve been trusted to take the game winning shot and missed. I’ve failed over and over and over again in my life. And that’s why I succeed.” – Michael Jordan

“Success consists of going from failure to failure without loss of enthusiasm.” – Winston Churchill

When you take these words into consideration, you understand how powerful failure can be. The truth is that you only fail when you give up or don’t try at all. You’re not a failure if you try something and it doesn’t go as you want. When you keep trying until you’ve found the solution or answer, you achieve success. Failure is not the opposite of success, it’s part of success!

Signs that you may have fear of failure

In order to overcome this fear, it’s essential that you first get to know if you’re suffering from it.

That’s why I’m about to mention some symptoms that you might be experiencing:

Ways to overcome the fear of failure

If you’ve come to the conclusion that you’re afraid of failure, don’t worry. I’m about to explain how you can overcome it.

It may interest you

Turn Failure Into A Positive Force

Failure is the Key to Success

I hope this article was helpful for you and you finally eliminate your fear of failure so you can start taking action in the direction of your dreams and become who you were born to be. If you have any questions or feedback, feel free to leave a comment below! Thanks for dropping by! 🙂

2 thoughts on “Afraid of failure? Tips to overcome it”