You are here
Home > Avoid scams > What is Freedom Circle about? A scam to avoid! 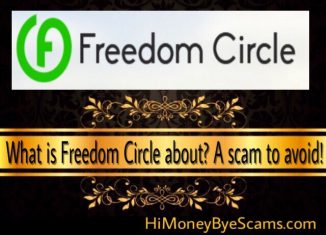 Today I came across a page called Freedom Circle, which I didn’t like because it reminded me of other pages of scams like Dubai Lifestyle App and 1K Daily Profit.

However, I wanted to watch the video and take a look at the page and do an analysis of both to convince myself 100% that it was another scam.

Unfortunately, I wasn’t wrong when I thought it was a scam, so I will explain what I found and why you should stay away from it.

The sales video is full of false claims and lies

The sales video is very similar to other scam videos, I’ll show you some snapshots of the video and explain you those scammy factors you need to consider to know the truth:

If you’ve read the review I wrote on the Millionaire Blueprint scam, you already know that Free Money System is the name of another scam.

But the guy of the video is saying that the system is free and “only done for you”, what I find it’s suspicious because nobody does nothing great for others for free, so what’s in it for them?

I usually get away from programs that show you screenshots of bank account balances because most of them result in being scams.

I also remember that the guy of video of the 1K Daily Profit scam also shows a similar screenshot, as you can see below:

Can you see the similarities? Yes I bet.

Another thing is, I don’t believe it because scammers are usually the ones who tell you that they’ve made lots of money in a short period of time and that you can get rich quick without doing much, but that’s clearly not true.

This one is hilarious. Have they been spying me to know what my IP is?

The private invitation thing. I remember hearing the same words when I watched the 1K Daily Profit sales video.

This one is very common in scams. They claim that you’ve received one of the 25 private invitations to make you feel special, as if you had won a prize that not many people have.

The truth is that nobody has received a private invitation and anyone with an Internet connection can access to that page through a simple Google search.

Guess what he wants by telling you that he’s about to show you something nobody ever dared to do before. He wants you to get excited and interested in what he has to say.

I’ve lost the count of the amount of times I’ve read “your link will be expired and you’ll never hear from me again” in other scams.

It’s completely fake because anybody can visit that page whenever they want, but con artists will usually say this to prevent you from leaving their website.

It just sounds so unrealistic when someone claims that he/she is going to make you a millionaire for free, like why don’t you spend your time trying to make a fortune yourself?

First of all, he claims that you can get access to his software for free. But later in the video, you can see how he says that you only need $250.

There’s no way that you invest $250 and can make millions by trading binary options. Even if the Freedom Circle software worked, you’ll need to invest a lot more than $250 to make a fortune.

Another statement they make that’s not true is that their software is powered by an algorithm that wins trades with a 99.8% accuracy, what is not possible.

See how they play with your emotions?

How evident it is that Freedom Circle is a scam?

If you’re still wondering why Freedom Circle is indeed a scam, see more proofs in this section.

Is Kyle Stanford the CEO’s name or is it all made up?

After watching the sales video, I was almost convinced that it was a scam, so then I looked for other details of the page.

I found out that the page can be found in other languages like Spanish, Dutch and Italian so I typed “www.freedomcircle.co/es” in the search bar to check the page in Spanish.

If you visit the website in English, you can see that the CEO’s name is Kyle Stanford:

However, if you take a look at the website in Spanish, you can observe that the CEO’s name is Francisco Ruedas:

As you can see above, the picture is the same but the name changes from English to Spanish, so I bet it will also change in Italian and Dutch. This just confirms that the CEO’s name is fake.

I searched for the picture to know if it’s also fake and stolen from the web, so I typed “man in a countryside” on Google images, and I found it on a stock website called 123RF.com:

The fake founder’s name and the picture stolen from a stock website just prove that the Freedom Circle’s CEO is a made up character. Take into consideration that scammers will never reveal their real identity.

After finding out that “Kyle Stanford” is not the real creator of Freedom Circle, I tried to discover the legitimacy of the comments. That’s why I checked again the website in Spanish and compared the comments to the English ones.

Let’s see some of them in English and Spanish:

You can observe that the comments are just translated but the names change from English to Spanish, what already shows us that the testimonials and comments are all made up.

Another thing is, the comments are all positive and are written in a similar way, what makes it less authentic because we all have an unique opinion and writing style.

If you go to the Freedom Circle page, you will notice that there’s a countdown timer:

Wondering why is it fake? Well, it’s designed to pressure you to join as soon as possible. They say that once the clock gets down to 0, you won’t be able to join, but this is not true because nothing in the page changes when the clock is at 0.

You can even refresh the page and see the countdown go back to how it was the first time you visited the page.

Remember the pop-up that appears in other scam pages like the Dubai Lifestyle App when you are about to leave the page?

You can also see a similar pop-up whenever you’re about to exit the Freedom Circle page.

Scammers usually use this tactic to stop you from leaving without joining, they incite you to enter your email as you can see above. Oh and they tell you that it’s free because they know that this way it will be easier to get you to join.

Again, don’t fall for this crap. We all know it’s not free.

I went to the end of the page and saw a footer menu, as you can see:

They tell you to read their terms & conditions and disclaimer page, so I clicked the buttons but they didn’t take me to the disclaimer or terms page. They took me to the top of the page instead, where you can watch the presentation video I’ve been explaining.

I also clicked the rest of the buttons but they all took me to the top of the page, what means that the disclaimer, terms, privacy, affiliate and support pages don’t exist so the footer menu is fake.

I don’t know about you, but I wouldn’t trust a website that has a fake menu.

How does this scam work?

Okay, it’s time to tell you how people who join Freedom Circle get scammed.

They’ll ask you for your email address, your name, your phone number and a password to register.

As soon as you join Freedom Circle, you’ll be taken to the software page and you’ll be asked to make a deposit of $250 to activate your account and start trading.

Once you fund your account with $250, you’ll see how you start losing trades again and again, day after day, till the deposit goes down to $0.

Guess where your money goes to? The recommended broker will get a part of it and the Freedom Circle creators (a.k.a. the scammers) will also get a part, as well as the fake testimonials (the ones who appear in the video). In short words, everyone involved will get a profit and you’ll be the one losing.

What can you do if you’ve fallen for this?

See what you can do if you’ve joined or been scammed:

Take into account that they are capable of sending you spam emails asking you for more personal or financial information as well as sell your information to other scam artists.

They’ll use manipulative and abusive tactics to get the most they can from you. They’re the ones who want to get rich quick by stealing other people’s money and possessions and important information.

In any case, avoid them and don’t let these unscrupulous and unethical people get away with something they don’t deserve.

A legit opportunity for you

Freedom Circle won’t give you anything good, it’s been proved to be a scam so it will waste your time and money instead.

If you really want to make money online, I recommend that you join Wealthy Affiliate.

It’s an online marketing platform where you will learn to create a digital business based on your passions and scale it to any level of success, in a legitimate and ethical way.

If you join for free, you’ll be able to build 2 free websites and you’ll also get 20 free lessons and training, as well as support and help from me and the community members and owners.

Thanks for reading this Freedom Circle review and I hope I’ve shown you enough proofs that this software doesn’t work.

Please feel free to share this post on social networks so more people get to know about this scam and avoid it.

If you have any questions or comments about Freedom Circle or anything related to Wealthy Affiliate or making money online, don’t hesitate to leave a comment below and I’ll reply to you. I love hearing from you all! Thanks for dropping by 🙂