You are here
Home > Avoid scams > Retired Millionaire review – Is it a scam? 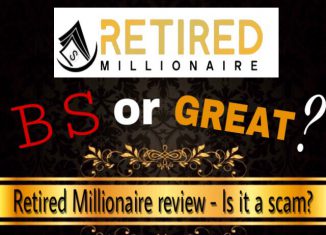 I just found out another website called Retired Millionaire, and to be honest, the second I stumbled upon it I thought it was another online scam because of the design of the page.

But the design is not the most important thing to determine whether a program or system is a scam or not.

Therefore, I watched the sales video and did a research to find out the truth and write a review to let you all know what Retired Millionaire is really about.

What is Retired Millionaire about?

Greg Larson, the alleged creator of Retired Millionaire, claims to be giving a few lucky people the opportunity of a lifetime.

He says that this is the perfect system if you want the following:

He claims to have multiple money making websites that can supposedly make you between $1000 and $10,000 per day.

Oh, and according to him, his amazing site is the only one in the world that can “guarantee” a $500 payday. Why does he claim this? I suppose he doesn’t want you to look for other money-making opportunities, he wants you to think his system is the best.

He’s apparently doing this because he’s already made his millions and now wants to give the same chance to 50 people.

He’s going to give you a website that you’ll need to set up and then it will start to earn you money even while you sleep or while you’re on vacation.

He also talks about how we’ve seen all the scam websites that just make empty promises and that people who fall for them remain broke.

He calls himself one of the richest Internet millionaires but I’ve never heard of him, to be honest. He doesn’t even show his face on the video, so it’s not possible to verify his identity.

Can Retired Millionaire make you money?

The outright answer is no, Retired Millionaire won’t make you any penny.

After watching the sales video and doing some research, I came to the conclusion that Retired Millionaire is a hoax.

So how do they scam you?

They ask you to enter your name and email in a form below the sales video and then you’re taken to another page where you have to pay $47 to get this system.

But don’t you think that the $47 is the end of it. After giving them your email, expect to get lots of spam emails of offers similar to Retired Millionaire.

Even if you don’t pay the $47, these con artists will sell your email to other unethical marketers, who will send you emails without your consent.

If you do pay the $47, they’ll try to persuade you to purchase other additional products (upsells), and the total cost can amount to thousands of dollars.

They’ll try to steal you as much money as they can.

Is Retired Millionaire a scam?

Retired Millionaire is a scam, without any doubt. The sales video and whole site are full of lies and deceitful tactics.

In this section I’m going to post some undeniable proofs that expose Retired Millionaire as the fraud it is.

They’re actors (especially Fiverr actors) who have been paid in exchange of positive feedback for Retired Millionaire. Most of them only charge $5 so that’s cheap for the scammers.

This old man you can see below has already appeared in lots of online scams, 1K Daily Profit being one of them.

If you’ve taken a look at the Retired Millionaire site, you’ve read this too:

Have you been paid the $500 after watching the video? I don’t think so because if you had been paid you wouldn’t be here reading this review. After all, you want to know whether this program can benefit you or not.

You and I have watched that video but haven’t been paid the $500, so this is another proof that Retired Millionaire is a scam.

“Greg Larson” doesn’t even explain how you’re going to get paid the $500, so it’s obvious that that’s just a hyped up claim to hook you up and get you to keep watching the video until the end.

“Greg” claims that his only giving this opportunity to a select lucky few, but this is just a tactic to make you believe that you’ve been selected and get you so excited that you end up making the purchase.

Scammers always claim that there are limited spots available or that there isn’t much time left to join because they want their crappy offer to appear more valuable.

If you’ve watched the Retired Millionaire sales video, you may have noticed they don’t tell you important stuff to take into consideration before making a purchase or joining some kind of program.

In this case, “Greg” doesn’t reveal his face, what makes me think that he’s a fictional character. I searched for information about him but didn’t find anything outside of Retired Millionaire. It’s impossible to verify his identity because he doesn’t even show any picture of him.

Would you buy something from someone you don’t know if it’s real? I obviously would not.

Another thing is, he doesn’t explain how you’re going to earn money. He says that he’s going to give you one of his money-making websites but doesn’t tell you how his websites make money.

I believe this is important to take into consideration before buying any kind of product. Would you purchase a t-shirt without knowing its size, just because it looks good? I surely wouldn’t. Same happens here.

What about the disclaimer?

If you scroll down to the bottom of the Retired Millionaire site, you can read this disclaimer:

According to this disclaimer, “the typical purchaser does not make any money using this system”. You aren’t even guaranteed income or success.

Guess why they don’t tell you about it in the sales video? Clearly, they hope this disclaimer will go unnoticed and you won’t read it.

Therefore, this proves how everything they say in the video is fake and fabricated.

My final verdict and #1 pick

I believe I’ve provided enough information to prove how deceitful of a scam Retired Millionaire is.

I know it can sound attractive the idea of paying less than $50 for a system that can make you thousands of dollars overnight and on autopilot, but this plainly doesn’t exist.

If these miraculous systems existed, a lot of people would have already quitted their day job, or these systems would be so expensive that they wouldn’t be affordable for everyone.

As I’ve said a lot of times, there’s no magical system or software that will make you money in a short period of time and without putting in the effort. Anything worth having requires hard work, patience, consistency, among others.

If you’re committed to earning a living online or more, then I suggest that you start thinking in terms of starting your own business.

There’s only one platform that I always recommend for people looking to make money online. This platform (free to join by the way) includes step-by-step couses and training that will help you create and grow an online business.

I hope this review has been helpful to you and you never become a victim to scams like Retired Millionaire. Don’t hesitate to share this post on social media so more people know about this scam and avoid it.

If you have any questions or would like to share your opinion regarding Retired Millionaire, other programs or making money online, feel free to drop a comment below and I’ll reply ASAP.

Whatever you do next, I wish you the best! 🙂